The Summer of 1960 marked the beginning for the Corvette Club of Kansas City.  In September of that year, 23 members drew up the Club Constitution and ByLaws. During the Clubs second year, with 35 members, the Club became a Charter Member of the National Council of Corvette Clubs.CCKC has been growing ever since, and membership has expanded to over 100 . Today as in the past, the Club holds monthly activities and participates in Local and National Corvette Events.  CCKC celebrated it’s 50th Aniversary in 2010.

The first viewing of the Corvette was in 1953 at the Motorama in NewYork City.

In late 1953 production was moved form Michigan to St. Louis Missouri, by 1960 the Corvette had exceeded 10,000 units in yearly sales and the Nation proclaimed it had a true American Sports Car.

Dinah hosted an hour-long weekly for seven years. It featured Dinah and guest stars in a variety of songs including “See the USA in your Chevrolet”. 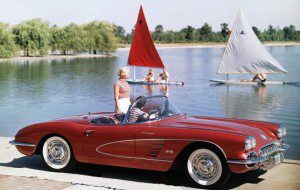 Kansas City had a small but loyal Corvette following.  Car owners from around the City formed the “Corvette Club of Kansas City” on July 24th 1960.  Twenty three Corvette owners met for a picnic at Lake Quivira and launched CCKC. The rest is history. 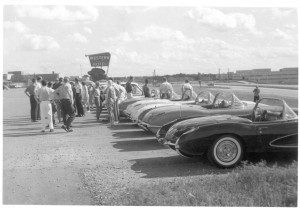 The third meeting of the Corvette Club of Kansas City was held on August 21st 1960. Twenty three Corvettes caravaned to the Western Hills Motel. 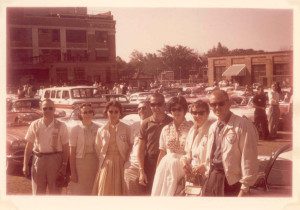 CCKC members attend the National Council of Corvette Clubs in June 1961 at the Corvette Assembly Plant in St.Louis, MO. 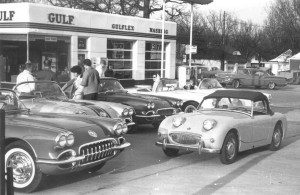 held a rally on October 1962, one of several that year. This rally was hosted by member Sam Snoddy and the cars left from the Mission Shopping Center and traveled to Ft. Osage and back. Of special note: The Sprite shown here took third place.

The Club’s display on the mezzanine of the Exhibition Hall for the Greater Kansas City Auto Dealers Auto Show in November of 1964. (Note the ’65 Mustang and the ’65 Corvette)

Where did the name Corvette come from?

Some have shrugged this off as only a marketing name that just sounds cool and nothing else, but it’s a term for a small fast warship. Harley Earl may have designed it and Zora Arkus-Duntov later refined it, but it was GM employee Myron Scott who christened the two-seat fiberglass sports car. Over 50 years later, it’s impossible to think “Corvette” without thinking of speed.

Any linked web pages are copyrighted by their owners, who are solely responsible for their content.