Hendrick Chevrolet is one of the largest Corvette

dealerships in the country 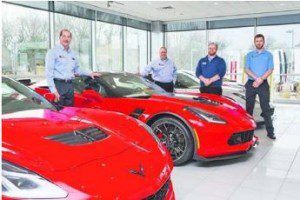 Surrounding a 2015 Corvette Z06 Coupe at Hendrick Chevrolet Shawnee Mission are, from left: Mike McGinley, president and general manager; Robert Wiegers, performance car manager; Jon Bivens and Brandon Vix.
On a crisp day in late December, one of the ultimate summer-type cars, the Corvette, is in hot demand at Hendrick Chevrolet Shawnee Mission at 8300 W. Shawnee Mission Parkway in Merriam.
The new 2015 Corvette Z06 has created the buzz at the dealership that is becoming known nationally as one of the top places to buy a Corvette.  “This one has 650 horsepower as opposed to the 460 horsepower it normally has,” said Mike McGinley, president and general manager at Hendrick Chevrolet Shawnee Mission. “This is the most powerful car and the highest horsepower car that General Motors has ever come out with. It can go from zero to 60 in 2.9 seconds.” And this is coming on the heels of the resurrection of last year’s Corvette Stingray, which was completely redesigned for 2014. Before then, it had not been called the Stingray since 1976. Because of the dealership’s growing national reputation for selling Corvettes, McGinley and Robert Wiegers, performance car manager at Hendrick Chevrolet, are fielding calls from interested buyers across the country as well as from those in Kansas City. Just before Christmas, Hendrick Chevrolet Shawnee Mission loaded a Corvette Z06 on a truck and delivered it to Jacksonville, Fla. McGinley said they had deals going with high – performance car buyers in St. Louis, Florida, Texas and even as far away as Hawaii. December was a very good month for HendrickChevrolet Shawnee Mission for selling Corvettes. In fact, they sold nearly 40 Corvettes in December, which was its second best month of the year.
“We are the 10th largest Corvette dealer in the country,” McGinley said. “Most dealers may have one or maybe they don’t have any. We are lucky to have a few because we have a pretty deep order bank.” They currently have about 35 Corvettes at the dealership. It is no accident that Hendrick Chevrolet Shawnee Mission has created a Corvette niche. McGinley said it starts with the owner Rick Hendrick and his obvious passion for high performance vehicles. “1993 is when Rick bought the stores in Kansas City,” McGinley said.
“Rick has always been a car enthusiast since he was a young guy. He was a mechanic. He dragged race. His first car was a Corvette. That is the car he always aspired to.” McGinley has the same type of passion for Corvettes and is a reason why Hendrick Chevrolet Shawnee Mission sells so many Corvettes. McGinley came to the dealership in 1992, became general manager in 1998 and a partner in 2000. In addition, McGinley races his Corvette in the Sports Car Club of America’s T1 road racing class. “The push came when I became the general manager because they are really cool cars,” McGinley said. It meant taking a chance. “Not every Chevy dealer is a Corvette dealer,” McGinley said. “You have to earn the right to be a Corvette dealer by selling them.
“For years you can only earn as many as you sell. So how are you going to earn more? We only get 30 a year, how are we going to sell 200?  Well, we were buying them, paying people window sticker and then selling them to try to build up our business over time.” McGinley and Wiegers said the dealership’s passion for  orvettes was one way to connect with the community in another way than just selling cars. The dealership sponsors two Corvette Clubs in Kansas City and through them, it has helped out with homeless veterans and Camp Quality. “Once a year we go up and give the kids a ride around the camp in a Corvette and spend the afternoon with them,” Wiegers said. Owning a Corvette, Wiegers said, is a lifestyle. “The grandfather had one, the father had one and now the son wants one,” Wiegers said. “I have been here long enough to see the generational move from father to son. It is a family event. “The overwhelming response is, ‘I can’t believe I have this car.’ They ordered this car 18 months out and then they get into the car and the feel of it and the opportunity to drive it, and being one of the few in Kansas City to have one is exciting. This is their prize possession to take on the Plaza on Sunday. It is their pride and joy.”
McGinley said a few people put in orders for the new Corvette Z06 as early as late 2013. Now that it has arrived, McGinley said it lives up to expectations. “If you pick up Motor Trend and read the articles in Motor Trend about the new Z06, it will tell you it is the best car on the market, period,” McGinley said. “The press the car is getting is bringing in a lot of people. “We are getting people who drive high performance Mercedes. We are getting people who are driving Porsche Turbos. We are getting a lot of new type of customers that in the past wouldn’t necessarily consider them.” The cost for the Z06 ranges from $80,000 to $90,000. When customers come into Hendrick Chevrolet Shawnee Mission to buy SUVs or a family car, they can’t help but let their eyes wander to all the Corvettes. Plenty of customers take photos of the Z06. “We give them free access to the car,” Wiegers said. “It starts that build of enthusiasm.” The goal for Hendrick Chevrolet Shawnee Mission is to sell 250 Corvettes in 2015. “That is quite a few,” McGinley admits. But they are going for it.
View Calendar

Any linked web pages are copyrighted by their owners, who are solely responsible for their content.